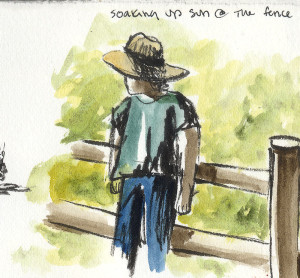 The local park gets plenty of traffic for interesting sketching. Recently we saw a large group of costumed folks gathered for a photoshoot. Among the participants were black and white witches, women with ethereal flowing satin dresses in blue and violet, a young lady in a beautiful monarch butterfly dress (complete with wings!), and one guy as Robin Hood. (A passer-by remarked, “Oh, look at the Green Giant!”)

More usual park denizens include people walking (both for exercise and strolling), running meets, families with kids and of course all kinds of folks with dogs. Most of them move through too fast for more than gestural sketches. Once in a while someone sticks around: the gentleman on the left was soaking up some sun for a while by the pond. 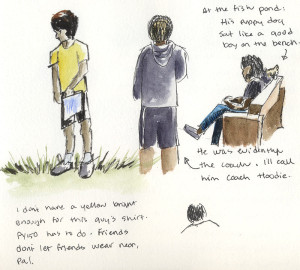 Also saw a big group of pre-teens who were gathered for a running meet. Not sure if this was a school or a club, but it was clearly an organized event. I sketched some of the post-run milling about. After a while the coach gathered them up for a little talk, then all dispersed.

The guy on the park bench was drawn later, hanging out by the pond with his remarkably well-behaved little dog. 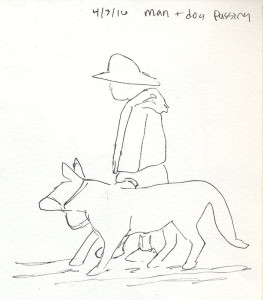 Tried some fast sketching of people on the move. There’s only a minute or so, tops, from the time someone gets close enough for a reasonable sketch until they’re too far off, and the perspective changes continuously from front to back as they’re moving. Talk about gestural. It’s more like taking a mental snapshot and drawing that, with a very brief window to recheck the source for details before they get around the bend and disappear.

And for the beast, here’s one of the local geese. These bad boys and girls wander by twos and threes, alternately making friends and kicking butts as the mood strikes them. I learned a bit about geese and found they are actually quite social creatures: their vigorous nipping of pant legs is probably less aggression and more finding out what I am made of. Still, they can nip HARD and if they are not in the mood to be friendly, you’ll know! I thought this was a pretty good rendition of the typical screw-you attitude they’re throwing around most of the time. 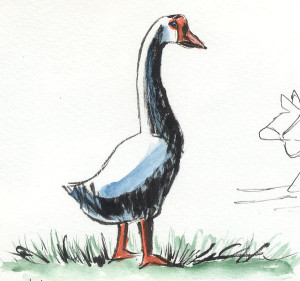