You might recognize this if you ever had a fish tank – well, almost. It’s a Cardinal Tetra, close relative of the Neon Tetra, which is one of the most popular aquarium fish in the world. I’ve always been a little obsessed with Cardinals and have kept plenty of them over the years. They’re hardy with a bit of care, and so incredibly beautiful. Saw a massive school of them at a public aquarium – in aggregate, they’re just breathtaking.     END_OF_DOCUMENT_TOKEN_TO_BE_REPLACED 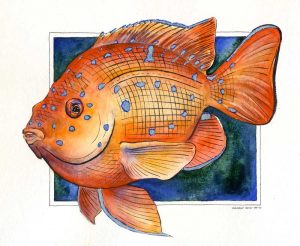 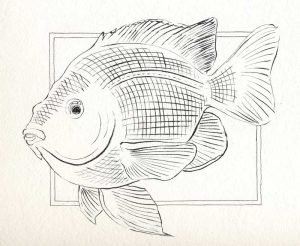 This time I thought to scan the fish before painting it. It’s the largest drawing of Inktober 2016 so far and possibly the largest thing I have drawn all year. Someone offered me knitted socks in exchange for a Garibaldi painting – I figured if she was going to work that hard, I had better do the same! This fish takes up the entire 9″ x 12″ page from the Windpower pad. I put down the base drawing with the Kuretake #40 ink brush using several reference images. Now, on to the paint!   END_OF_DOCUMENT_TOKEN_TO_BE_REPLACED 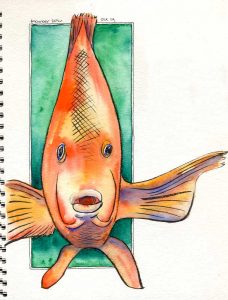