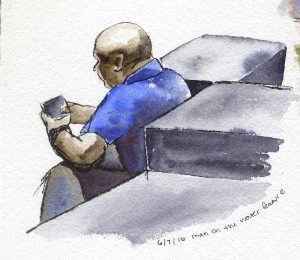 Been catching up on some scanning. Lots of sketches already in the new book!

Here’s a man on the scattered blocks of the water feature, for starters.

Once in a while I see someone that isn’t staring at a phone. This lady was actually reading old-fashioned paper. Go hat lady! 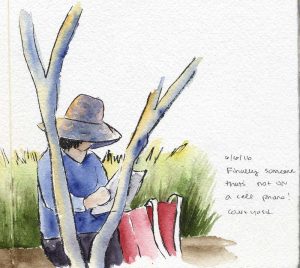 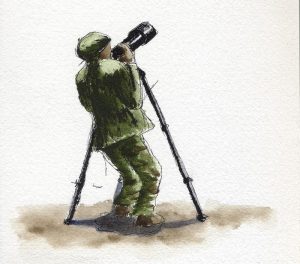 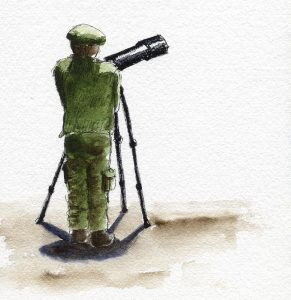 Following her, is an imposing looking gentleman who was photographing baby birds at the park. He was a great study in short poses as he crouched this way and that, capturing the action high up in the cormorant nursery. Backlighting just adds to the fun. Green Apatite was a good match for his camo.

Around the path from the birds’ nests, found a family enjoying the pond. I originally sketched Dad too small and he looked like an additional kid. I liked the dynamic of both parents watching over their girls, so I drew him again on top of the original sketch. Fortunately his laced fingers helped hide the mess from the first attempt. He was at an unusual angle, laying back but propping his head up with his hands to see the pond and his daughters. 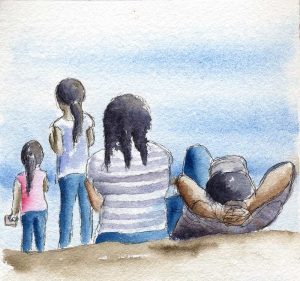 Finally, here’s a test sketch with my new Kuretake #40 brush pen. The ink was still working through the bristles, but I’m already in love! The Platinum Carbon ink carts work well in these, and it’s a thinner ink than the pigment ink in the Pentle brush pen. This means I’m already getting a stronger line, but can still obtain drybrush effects when desired. A very enjoyable workout on this tree in the corporate landscaping. 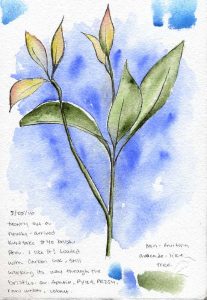