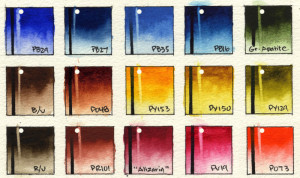 Here’s the 15 colors from the Mint Tin Palette, and why I picked them. I spent longer choosing these colors than it took to build the actual kit!

I didn’t make a complete mixing chart, but wanted to test some specific mixtures. Here’s three of the blues making various greens, neutrals, and purples, with a separate chart of some oranges, and the super-granular neutral made from PR101 and cerulean. 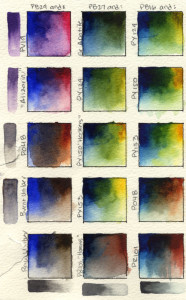 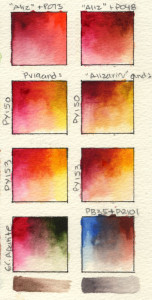 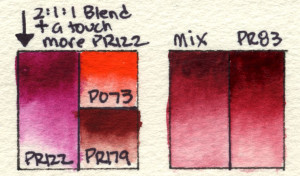 [edit 02/11/16] The third chart is my take on Alizarin Crimson. It compares pretty favorably with genuine (and oh-so-fugitive) PR83, but as noted above, it just didn’t work out well for me in practice. Included it here in case anyone wants to try on their own. It paints well, and looks good. I stopped using it because Da Vinci makes such a good Permanent Alizarin with just PV19 that I could not resist the opportunity to achieve the same color with just one pigment.