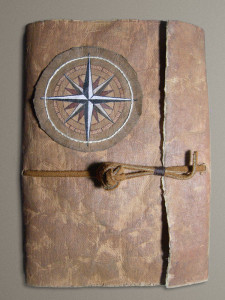 I spontaneously decided to pick up a pizza one night and found myself with 20 minutes to kill and nothing to paint with. Curses! So I made good use of that time thinking through initial designs for this.

The plan was to create a unified thing that would hold paint, water, brush, something to sketch on, and a bit of paper towel to wipe the brush. It had to be 100% self contained – not that it’s bad to put a brush in a pocket, but in this case I wanted something that was entire and complete by itself, with no extra parts to forget. The palette could be limited but had to be adequate for general painting. Ideally all the parts would remain attached, so there’s nothing to drop while using it. Finally, I wanted it to fit in a back pocket, so it would be easy to grab-n-go without having to think about it.

It took a little time thinking the design through, and I had a couple of false starts, but eventually ended up with this. The design might look familiar, compass roses are a favorite theme of mine. This project was also the dry run for the Starry Sketch Kit (so I could learn about the material prior to starting that project.) This is made of the same stuff (kraf-tex) and inked in the same way. For this project, I inked the compass rose on a separate piece and sewed it on, to create a little dimension. It’s about 4.5″ x 6.25″ and (roughly) .5″ thick. It does indeed fit in my jeans pocket.

Partially open. You can see the waterbrush tucked into the tie that closes it. And here it is completely open, ready to paint! Well, almost. 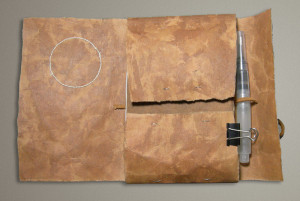 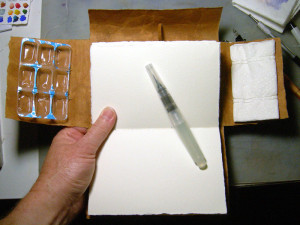 I had always planned to use that plastic tray (from a chewing gum pack) in this project, but once it was ready, the plastic seemed out of place somehow. This thing was just too vintage and cool for plastic! But I didn’t have any spare cash for one of Maria Coryell-Martin’s nifty Expedition palettes. What’s a low-budget creative to do?

Not a problem. I’ll make that too!

The first box I made holds standard half-pans, but it was too big to fit in the kit! Oh well, it will be used somewhere. Nothing goes to waste in my studio. It is larger than the one that eventually got used, so I considered it a practice project. This was good, since I needed to learn a thing or two about copper foil.

The final palette box is inspired by, but not particularly a copy of, the Expedition palettes. I made it out of copper craft foil, which is a little heavier than the heavy-duty type aluminum foil you might have in the kitchen. It’s cut out as one piece each (the bottom and the lid), folded into the box shape, and the tabs wrapped over a piece of 14-gauge copper wire to serve as a hinge. It’s comparatively easy to make, but I had some adventures while learning about folding copper foil! 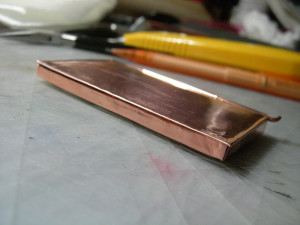 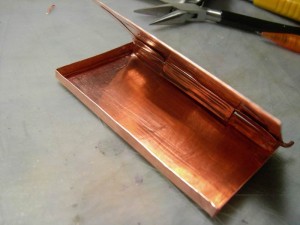 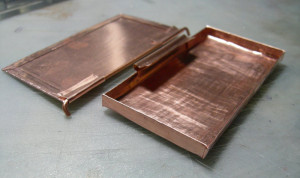 The pans were removed from some dollar store makeup kits. This set me back $1.50. I had to break the makeup cakes to get them out, then used some pliers to help free the little metal pans from the glue that held them. 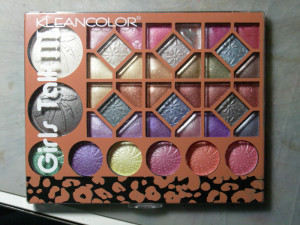 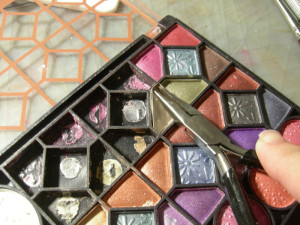 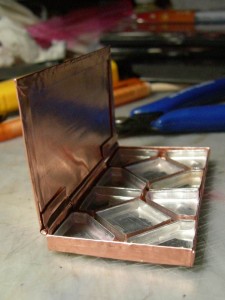 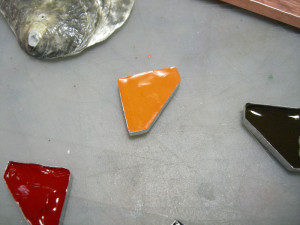 Once they were cured enough to handle, I placed them in the box and tamped in some uncured Sculpey clay. Decided not to bake it in, in case I need to remove a pan at some point. There’s not enough of it that the softness has been an issue (not yet anyway.) The pans themselves have a dab of poster putty to ensure they stay in.

I finished the box with a strip or two of copper foil tape, placed the pans and clay, and it’s finally ready to roll! That’s a business-card sized piece of paper, for scale. 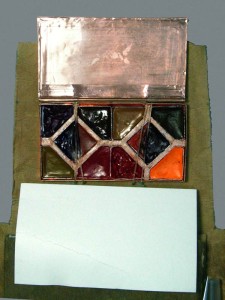 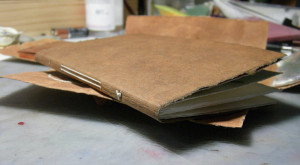 In practice, the kit as a whole is light, unobtrusive, and with all parts attached except the brush, very easy to get out and put away on short notice. The paper towel has a plastic sheet to go over it, so it can’t foul the sketchbook if I suddenly fold it. That was also the reasoning for a lid on the box – drip resistance.

The sketchbook is removable, made of Richeson 140lb cold press, 8 pages measure 3.75″ x 5.5″. The palette holds small amounts of 12 paints, with two neutral-complement pairs poured without a divider into each of the larger center wells. This allows me to sweep down the center and get a neutral, while still having the benefit of the pure colors off to the sides. In practice, it’s fun to paint with – useful and a little unpredictable, keeps me on my toes.

Finally the tiny box is about 1.5″ x just under 3″, and about .25″ thick. That was easily the most tedious part of the project, but I love how the box turned out. It’s surprisingly strong for being made of foil.

You’ll note there’s no real mixing space. The lid could be employed for that, though I often mix on the paper. Decided that for such a compact kit, I’d forgo the mixing space and just consider it a challenge!