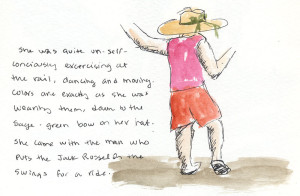 This lady did her exercise routine near the tot lot, utterly unconcerned with anyone looking at her workout.

I loved watching her. She was doing some kind of movement exercise, slow and thoughtful, sort of dance-like. Not one bit of self consciousness at all. Neither was she concerned, evidently, what anyone thought of her fashion sense. I used to live freely like that, and like her experienced no particular judgement on my choice of hairstyle or clothing. Friends and colleagues just accepted me as me, and I did the same. Somewhere along the line I learned to worry about such things, and started dressing to silence the critical voice that surely lurks behind the lips of everyone who sees me.  No one’s said a word from then till now, but I assume it’s there all the same.

It’s kind of amazing what a powerful prison our own minds are. Watching her dance helped let me out of mine.

Apparently she and her husband are birds of a feather. While she was exercising, he placed their Jack Russell terrier in a swing (the kind that’s like a basket, for the smaller kids) and gave him a push. The little dog swung high and enjoyed every minute of his ride. That’s not the first time I’ve seen them at it either. Y’gotta like a guy who not only gives his dog rides on the swings, he also figured out that the pooch would like that in the first place.