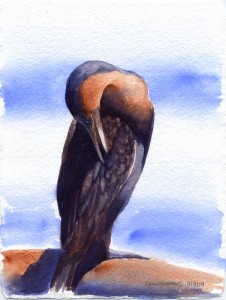 Garza 140lb CP, PB28 Cobalt and PBr7 Burnt Sienna. Some of the darker grays are PB29+PBr7. Painted him with thoughts of the compromised young Brandt’s that practically flopped onto my feet during a morning beach walk a few weeks ago. He was struggling to move out of the surf zone and it almost seemed like he came to us for help.

Wildlife rescue said that our sea temperatures have been so high, the bait fish that cormorants feed on were swimming too low for juvenile birds to find. They’ve had a rash of starving young Brandt’s all summer.  They dispatched animal control to collect this bird and bring him in for rehab and eventual release. So happy the Wetlands and Wildlife Care Center is on call at times like this – I hope they were able to help him.

Like the American Avocet, I had some issues with this bird painting. Most of it went well, but the eye just looked so wrong. Cormorant’s eyes appear to be close to the bill, perhaps I overshot the position but the painting just didn’t work. I couldn’t stand it and moved the eye. Surprised it worked out as well as it did; it helped that the area was to remain dark. The paper held together just enough to resist the little bit of scrubbing required to obliterate the original eye. (Good thing it was dark, I had hit the eye with some Micron pen trying to fix it originally! ) The hint of blue isn’t a fantasy, adult Brandt’s really do have blue eyes.