You might recognize this if you ever had a fish tank – well, almost. It’s a Cardinal Tetra, close relative of the Neon Tetra, which is one of the most popular aquarium fish in the world. I’ve always been a little obsessed with Cardinals and have kept plenty of them over the years. They’re hardy with a bit of care, and so incredibly beautiful. Saw a massive school of them at a public aquarium – in aggregate, they’re just breathtaking.

This fish started with ink, then received multiple layers of watercolor and gouache. I’ve never been a fan of painstaking layering as a watercolorist. My hat is off to painters who do it well; my results always just seemed unnecessarily fussy. This time it was the right answer, and really became pointillism when all was said and done. Someone’s unsolicited comment was that the fish appeared to be glowing, which told me I was on the right track!

The dark background was inspired by the murky tannin-laden water which is the fish’s natural home. It’s raw umber watercolor laid on in masstone. The fish is a combo of gouache and watercolor in ultramarine blue, with PG50, PV19, and Dr PH Martin’s Bleedproof White. It’s 7.5″ x 3″ – far larger than life! The actual fish would only be about and inch and a half long tops, and many are smaller.

Here’s a detail shot of the many tiny dots of paint that make up the iridescent band. And just for grins, following that is an animation of how the illustration developed. 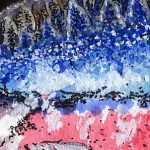