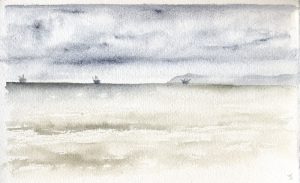 Spent a fabulous (and chilly!) morning at the beach this weekend, with a very late storm moving in. The storm only bothered dropping a smidgen of rain, but more than made up for it with dramatic skies. There was a tanker at anchor looking close enough to touch, container ships waiting for POLA/POLB, and… something between the drilling platforms. What is that?

Turns out it was another tanker, underway and hull-down. I’m familiar with the phrase after 20+ Patrick O’Brian novels, but have never actually seen it before. In this case, the tanker’s bridge was peeking mysteriously over the horizon, not looking like a ship or another platform or anything that made sense, until the rest of it rose into view. Eventually the entire tanker appeared, moved through behind the anchored Cosjade Lake, and headed into port.

Also got to see Isabel, she runs laps between the drilling platforms. I’ve noticed her position on MarineTraffic.com many times, so it was a treat to see her up close running parallel to the beach.  Should have taken her picture.

Here’s tanker Cosjade Lake, riding at anchor, and the place she’s heading, the ports of Los Angeles and Long Beach. The dark block on the mid-left is drilling platform Ethel. 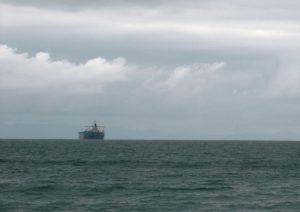 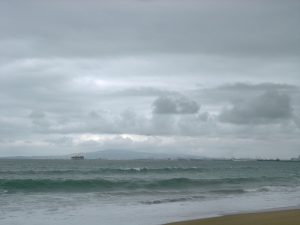 In other news, with this sketch I am finished with Daniel Smith’s Sodalite. It’s such a lovely blue-gray, I can’t help but want to use it; after a long trial, it’s just too granular to be much use. It goes from inky dark to scattered grit with no in-between. That’s sort of useless for washing clouds. It will still be in my arsenal for special applications, but it’s just not pulling its weight on my everyday palette. Time to heave a sigh and take it out of the Panter tin. I brought back Bistre and Homer’s Gray, reliable old favorites that never let me down.

DS Graphite is still in, for now. It works well from masstone to tint, and offers a unique warmth that my other grays don’t offer. The two mentioned above are both premixed, and I do tip them a little blue. Admittedly I could bias them the other way, although the warmth in each comes from burnt sienna and Indian red. Letting those colors shine through would make the grays look a little brownish – no thanks! Graphite is warm with no hint of color whatsoever, which provides a welcome option for sunlit metal and granite.

This sketch represents another last, though in this case a good one: It is the last sketch of Book #11. I’ve taken over a year to fill it, a process that typically takes me 6-9 months. There’s been a lot going on in the past year, some bad and some good. Among other things, I discovered a passion for knitting thanks to a generous coworker, and learned a lesson about paper that has guided my choices in constructing the next book. At last, the final page has been turned and it is time for this book to join its brethren on the archive shelf. On to #12!!