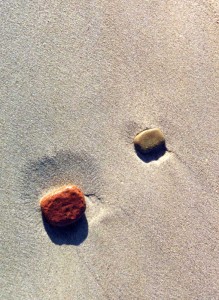 I’ve been digging through scads of old photos this weekend, scrounging for reference pics. Found a few winners, including this shot of some pebbles on the lakeshore in Chicago, taken on vacation in 1998.

I wanted to keep a limited palette and also explore the sand-creating possibilities of the best granulator I know: Daniel Smith Genuine Purpurite. This stuff is so granular it’s almost best not to really paint with it, as much as dab it on and let the water float it around.

In some test swatches with copious amounts of water, the paint reduced to a very light transparent wash and a pattern of heavy, distinct grains that did indeed look like sand. Perfect!

I didn’t photograph every step, here’s a recap: started with Ultramarine Blue (PB29) and Quin Gold Deep (PO48) to get color with potential for a neutral. Wet the paper thoroughly and floated the color in, bluer in one corner, oranger in the other, and somewhat mixed up in the middle. As it dried, the foreground corner ended up being the coolest, which wrecked my plans for a horizontal format. Fortunately it looked great vertical, so… now it’s vertical. Welcome to the randomness of watercolor!

Now it’s time to bring on the big guns… purpurite. You just can’t mess with this stuff, or it looks nasty, but I only wanted a thin layer so I just floated it on right over the rock areas. It would not be too thick to paint over later. So, wet the paper again, I mean dripping wet, and dabbed some on. It moved, but not in a very interesting way. More paint, better, but not spot-on yet. It was starting to get dry so I spritzed again, and then it started running along the trails of fresh water. Bingo! Water and rich pigment started behaving like water and sand, just what was needed. 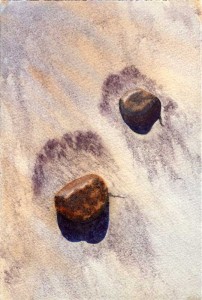 Let this dry and then back and forth with the rocks, mostly liked them but kept fiddling. Finally scanned it at this stage, to post and ask for opinions, but on screen I saw what I wanted to do with it: Lighten the heavy shadows and add a little more detail in the sand. That was tricky with purpurite already on there, but dropping on water then dropping the paint in gently got it done without muddying up the underlayers.

Then it needed some more blue to make the blue shadows make sense, and now I think it’s all but done. When it has dried thoroughly, and if there is nothing else to do, I will take an Xacto to the rocks for a few final highlights. 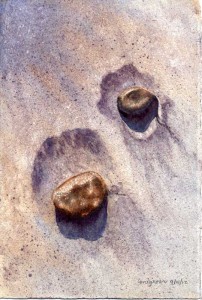